Please come, show your support for Mr. Warburg, as well as your interest in a green future for America. And, say hi to Beaumont Solar’s CEO Phil Cavallo while you’re there!

Here’s a brief sample from Mr. Harburg’s book, where he’s offers an account of Phil Cavallo’s purchase of Beaumont Sign Company and subsequent transformation of it into the Beaumont Solar Company: 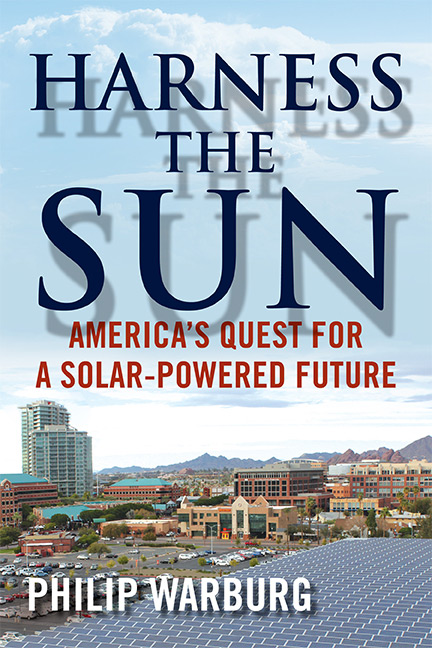 Finally, someone has to get the equipment installed and make sure it runs properly. For several of the New Bedford projects, that key role has been played by a century-old sign-company-turned-solar-integrator. When Phil Cavallo bought Beaumont Sign Company in 2006, it was a frugal operation run by the family’s third generation. Its customers ranged from chain stores to area banks, and its revenues were about $2 million per year. A native of greater Philadelphia who had logged in nearly three decades as a self-described serial entrepreneur, Phil had done everything from designing missile guidance systems for Raytheon to launching telecom start-ups. It was time, he felt, to go local. “I had flown all over the world doing business for big corporate America;” he tells me. “I wanted more of a community-based business where I could give back in ways and develop a relationship in ways that I hadn’t been able to do in any other job”

Phil’s initial intention was just to keep on selling big commercial signs. It only took a few months, though, for his entrepreneurial drive to kick in. He looked at Beaumont Sign’s 1,800 loyal customers and said to himself, “There’s something else we can sell to those customers besides signs.” Initially he thought of small-scale wind turbines. Turning to a colleague at Beaumont, he asked: “Hey, is there a big difference between putting up a wind turbine and putting up a billboard? It’s got a foundation, it’s got a tower, it’s got a sign at the top.” The colleague was OK with the idea, so they gave it a try. After being hired by the State to take down twenty-two turbines that were improperly permitted, they set about building some new ones, but the slow pace of moving wind proposals through local planning bodies sapped their ardor.

Phil then turned his focus to solar. Reading Inc. magazine, he was impressed to see that PayPal tycoon, Tesla creator, and SolarCity bankroller Elon Musk had been named 2007 Entrepreneur of the Year. What really struck him was the scuttlebutt that SolarCity might go public, even though it had only been launched the previous year. “From VC [venture capital J and working in the Valley, I knew that, to go public, you need to have an unfair competitive advantage, you have to be in discontinuous innovation, and you have to have huge market cap potential:’

Phil’s vernacular swings sharply between the heady lingo of a venture capitalist and the down-home jargon of a community entrepreneur. One moment he’s back “in the Valley.” The next he’s in gritty, workaday New Bedford. ‘I’m lookin’ at this install business, and I’m goin’ Hey, we can install signs on rooftops. We can do this all day long-laggin’ ‘em into roofs. Why can’t we install solar panels? “‘ He lost no time jumping into this new field. In a training program for solar installers offered by a leading PV manufacturer, he remembers a moment when one of his classmates quipped: “You know the definition of a successful solar company?” The guy paused for effect before answering his own question: “An electrical engineer with a backhoe.” As a trained electrical engineer with a yard full of sign-installation equipment, Phil had a somewhat different response: “I got a crane truck- better than a backhoe! “

Starting small, Phil sent Beaumont crews to install a few arrays on residential rooftops in neighboring Dartmouth, Massachusetts. He calls this the “off-Broadway performance scenario’: Soon enough, he had twenty-plus home solar contracts on his desk, and his new line of business was drawing the attention of the local media. It was the right moment to make the leap to larger projects, and to give the company a new name: Beaumont Solar. The timing was perfect, as BlueWave’s DeVillars and Morrissey were ready to move New Bedford’s solar initiative forward. The transformed sign company landed several plum jobs.

One of Beaumont’s breakthrough projects was a sao-kilowatt PV facility just across the street from New Bedford High School. Like the school itself, the solar array was built on a closed, capped landfill. It now supplies a quarter to a third of the high school’s electricity, but Phil says this may increase if the building’s roof passes muster as a secure spot for additional panels. We peer through a chain-link fence at several dozen orderly rows of panels before heading out to Sullivan’s Ledge, a former waste dump so polluted that it remains an actively treated, EPA-designated Superfund site.

Once a quarry, Sullivan’s Ledge was used by local industries through much of the twentieth century as a dumping ground for waste oil, PCB-laden electrical capacitors, other volatile chemicals, and demolition materials. It was fenced off in 1985, but it wasn’t fully capped for another fifteen years. Even today, an on-site treatment plant pumps and decontaminates groundwater while a network of vent stacks channels the release of landfill gases. When Phil and I arrive, a specially trained crew is ever-so-gingerly preparing the earthworks for a 2-megawatt PV array. We walk out onto a muddy stretch of land where two guys operating miniature excavators are carefully digging a trough for the electrical cabling. To protect the clay contaminant barrier that is buried just 36 inches underground, there are strict weight limits-s pounds per square inch-on all equipment allowed at the site. The excavator operators know that their small, smooth-edged shovels can dig no deeper than r8 inches as they work the soil.

The first few hundred ground mounts for solar panels are already in place along a stretch of Rat land abutting a cluster of self-storage sheds and a gas station. Hefty, above-ground concrete blocks hold tri­ angular steel braces in place-a safer mounting technique for panels than driving steel poles deep into the ground given the site’s pollution hazards. Ultimately this facility, with its eight thousand PV panels, will save New Bedford about $2 million in electricity costs over a twenty-year period.

In all, New Bedford’s solar initiative is expected to supply about 6o percent of the municipal government’s power needs, reducing its electric bills by about $I million annually. Better still, the city has incurred no capital costs because the solar installations are all owned and operated by a third party. Power purchase agreements with companies like SunEdison and Con Edison Solutions set fixed electric rates that are well below what the city has been paying for its power. And on top of those financial benefits are the local jobs at firms like Beaumont Solar. Fifty people are employed at Beaumont today, and quite a number of them have come straight out of the vocational education program at New Bedford High. Beaumont has paid for others to attend night school, to get trained as licensed electricians. Several have come from troubled homes. “It’s sort of a shot in the arm to get these kids feeling good about themselves;’ says Phil.

Order Harness the Sun: America’s Quest for a Solar-Powered Future from Amazon!